Orisha – in the native religion of the Yoruba people – are spirits sent by The Supreme Creator Olodumare. for the guidance of all creation and of humanity in particular, on how to live and be successful on Ayé (Earth). Most Òrìṣà are said to have previously existed in the spirit world as Irumole, and then become incarnated as human beings here on Earth. Others are said to be humans who are recognised as deities upon their death due to extraordinary facts accomplished in life.

Many Orisha have found their way to most of the New World as a result of the Atlantic slave trade and are now expressed in practices as varied as Santería, Candomblé, Trinidad Orisha, Umbanda, and Oyotunji, among others.

Yoruba tradition often says that there are 400 + 1 Òrìṣà, which is associated with a sacred number. Other sources suggest that the number is “as many as you can think of, plus one more – an innumerable number.”

Practitioners traditionally believe that daily life depends on proper alignment and knowledge of one’s ori. Ori literally means the head, but in spiritual matters, it is taken to mean a portion of the soul that determines personal destiny.

The Orisha are grouped as those represented by the color white, who are characterized as tutu “cool, calm, gentle, and temperate”; and those represented by the colors red or black, who are characterized as gbigbona “harsh, aggressive, demanding, and quick tempered”. As humans do, orisha may have a preferred color, food, or object. The traits of the orisha are documented through oral tradition

The following video is a  brief description of some of the Yoruba Orishas. by Falokun Fasegun For more information go to http://www.ojiseegun.com

Zinli  is a funeral rhythm on the Abomey plateau (historic city of BENIN), which kept this initial role for a long time before also being included in the popular music register.

Prince Gbéyin, (futur king Glele of Dahomey  ) created  ZINLI in the 19th century on the occasion of the funerals of a friend of his father the king Guezo

The Zinli is played with a drum vase which gave its name to the rhythm:
All this is accompanied by the sounds of gongs, rattles and clapping of the hands supported by songs and dances.

The Bantu beliefs are the system of beliefs and legends of the Bantu people of Africa. Although Bantu peoples account for several hundred different ethnic groups, there is a high degree of homogeneity in Bantu cultures and customs, just as in Bantu languages The phrase “Bantu mythology” usually refers to the common, recurring themes that are found in all or most Bantu culturesAll Bantus traditionally believe in a supreme God. The nature of God is often only vaguely defined, although he may be associated with the Sun, or the oldest of all ancestors, or have other specifications. God is almost never described as the Creator of all things, as in most Bantu mythologies the universe is eternal and has no beginning. Animals are also a part of this eternal universe. While not its creator, God is intimately related to the universe; 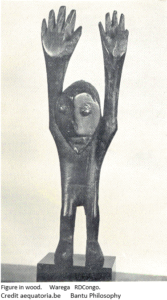 All religious practices are intended to worship God. This traditional attitude of Bantu belief systems has been modified, to various degrees and in various ways, by the advent of Christianity (or Islam), as the God of Christians and Muslims has been equated to the Bantu supreme God. Mungu has thus become a God that cares about humanity and that it makes sense to worship and pray toIn most African cultures, including Bantu cultures, veneration of the dead plays a prominent role. The spirits of the dead are believed to linger around and influence the world of the living The traditional culture of most Bantu peoples includes also several fables about personified, talking animals. Norman Mailer records how he got hold of Bantu Philosophy* from which he extracted the following essential understanding of the world:

“The instinctive philosophy of African tribesmen…saw humans as forces, not beings. So a man was not only himself, but the karma of all generations past that still lived in him, not only a human with his own psyche but part of the resonance, sympathetic and unsympathetic, of every root and thing about him.”