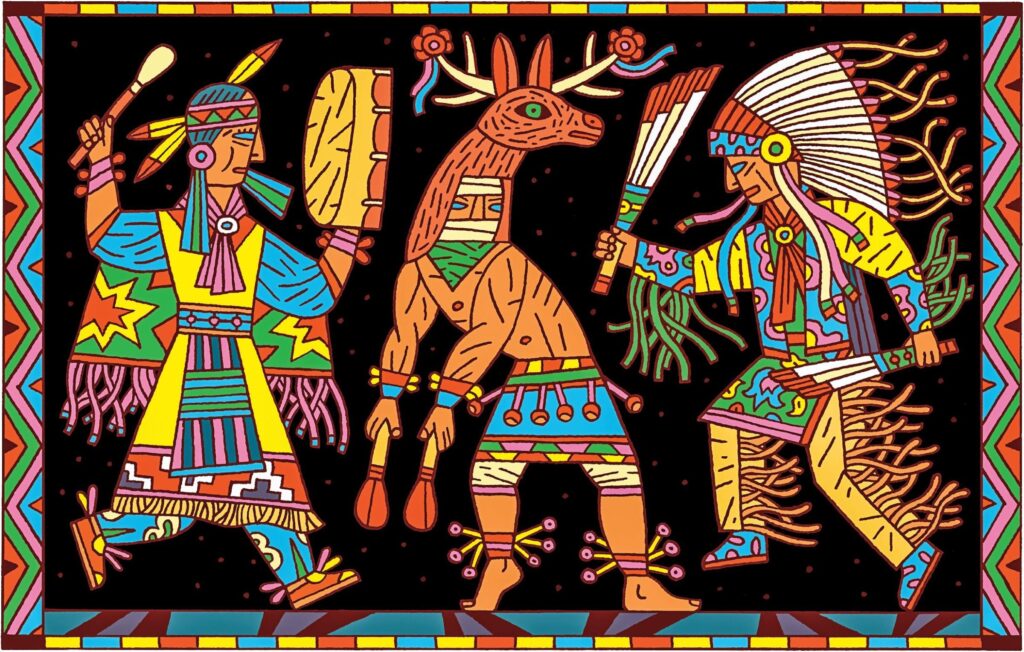 The principal  themes of American Indian dances  concern the celebrations of life transitions, mortuary rites , war and hunt. So-called animal dances varied according to the local fauna, a tiger mime belonging to tropical peoples and a bear cult reaching across the northern part of North America and into Siberia.

Religious magic, or shamanism, practiced by societies or individual priests, is somewhat similar to some practices among Siberian.  Variously practiced and used for healing the sick and communication with the spirit world, shamanism extends to southeastern Brazil but is most potent and most trance-oriented among the Arctic peoples.

A distinction between performer and spectator has long existed in some American Indian dance for various reasons (ex Spirit impersonations, including masks and noise, were used in widely separated areas to frighten nondancers).

Religious symbolism is significant even in the human interactions of the dance. Men often symbolize phallic,aggressive supernatural beings and rain-bringing deities, whereas women symbolize actual fertility in agriculture . In the animal realm are also separate roles for men and women

survived, with or without European modification.

Native American religions are the spiritual practices of the indigenous peoples of North America. Ceremonial ways can vary widely and are based on the differing histories and beliefs of individual tribes, clans, and bands. Early European explorers describe individual Native American tribes and even small bands as each having their own religious practices. Theology may be monotheistic, polytheistic, animistic, shamanistic… or any combination thereof, among others. Traditional beliefs are usually passed down in the forms of oral histories, stories, allegories, and principles.

Dances have always been significant in the lives of Native Americans as both a common amusement and a solemn duty. Many dances played a vital role in religious rituals and other ceremonies; while others were held to guarantee the success of hunts, harvests, giving thanks, and other celebrations.

Commonly, dances were held in a large structure or in an open field around a fire. Movements of the participants illustrated the purpose of the dance — expressing prayer, victory, thanks, mythology, and more. Sometimes a leader was chosen, on others, a specific individual, such as a war leader or medicine man would lead the dance. Many tribes danced only to the sound of a drum and their own voices; while others incorporated bells and rattles. Some dances included solos, while others included songs with a leader and chorus. Participants might include the entire tribe, or would specific to men, women, or families. In addition to public dances, there were also private and semi-public dances for healing, prayer, initiation, storytelling, and courting.

Dance continues to be an important part of Native American culture. The dances are regionally or tribally specific and the singers usually perform in their native languages. Depending upon the dance, sometimes visitors are welcomed; while, at other times, the ceremonies are private.

Here are some of them : 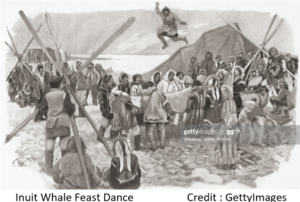 Formerly, Inuits  held elaborate outdoor ceremonies for whale catches and similar events. In Alaska, preliminaries included the rhythmic mime of a successful whale catch, with a woman in the role of the whale.

A sprinkling of ashes on the ice drove away evil spirits, and there were incantations and songs when leaving shore, when sighting the whale, and before throwing the spear, all of them songs that the “great kashak (priest)” sang when he created the whale.

the whaler’s wife came to meet the boat in ceremonial dress, dancing and singing, and boys and girls performed gesture dances on the beach. Then, inside a circle of large whale ribs, the whaler’s wife and children performed a dance of rejoicing. 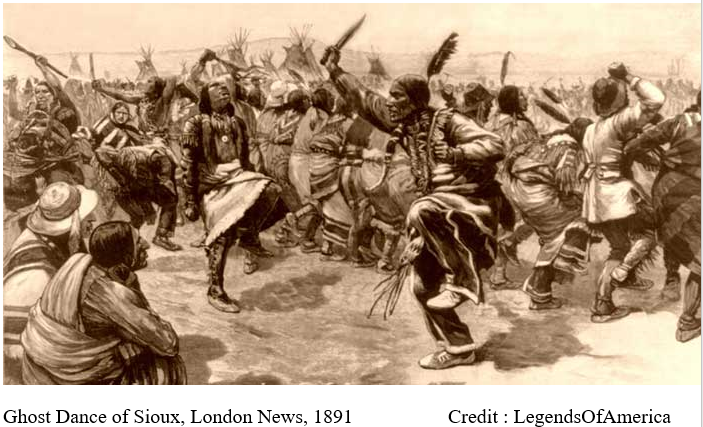 This movement of the late 1800s was a religious revitalization movement in the Western United States. Initially founded as a local ceremony in Nevada, by the Paiute prophet Wodziwob, the movement did not gain widespread popularity until 1889–1890, when the Ghost Dance Religion was founded by Wovoka (Jack Wilson), who was also Northern Paiute.

The Ghost Dance was created in a time of genocide, to save the lives of the Native Americans by enabling them to survive the current and coming catastrophes, by calling the dead to fight on their behalf, and to help them drive the colonists out of their lands.

It is practiced primarily by tribes in the Upper Plains and Rocky Mountain areas. This annual ceremony is typically performed at the summer solstice, with preparations beginning up to a year before the ceremony. Though the dance is practiced differently by different tribes, the Eagle serves as a central symbol in the dance, helping bring body and spirit together in harmony, as does the buffalo, for its essential role in Plains Indian food, clothing, and shelter. Many of the ceremonies have features in common, such as specific dances and songs passed down through many generations, the use of a traditional drum, praying with the pipe, offerings, fasting, and in some cases the ceremonial piercing of the skin. Although not all sun dance ceremonies include dancers being ritually pierced, the object of the sun dance is to offer personal sacrifice as a prayer for the benefit of one’s family and community. 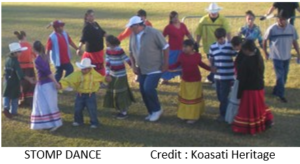 is a form of dance to celebrate culture of certain tribes.  Dancers dance in a counter-clockwise circle, woman following man following woman, and so on.  Women wear long skirts and turtle shell “shakers”, one of the main components in making the music.  Men “call” and are the highlight of the song by setting the pace of the dancers.  This particular dance is common to Indians in the Southeast part of the United States.  The dance is celebrated socially and religiously.  Social stomp dances are held throughout the year and can be held indoors or outdoors, with or without a fire.  Religious stomp dances are held during the summer at the height of the new crop season at particular stomp dance grounds during the Green Corn Ceremony  which  is a festive holiday our Koasati ancestors once participated in to give thanks to Abba Chokoli, the Creator for providing   with food, life, and faith.  The ceremonial fire provided for the Green Corn Ceremony is never allowed to burn out.