Buddhism encompasses a variety of traditions, beliefs and spiritual practices largely based on original teachings attributed to Siddhartha Gautama, commonly known as the Buddha, “the awakened one”, and resulting interpreted philosophies combining both philosophical reasoning and meditation.

Buddhism was born in India and spread to Eastern Asia

Two major extant branches of Buddhism are generally recognized by scholars: Theravada (Pali: “The School of the Elders”) and Mahayana (Sanskrit: “The Great Vehicle”).There is also a third tradition Vajrayana ( “Diamond Vehicle” or “Thunderbolt Vehicle”) which is sometimes classified as a part of Mahayana Buddhism

Most Buddhist traditions share the goal of overcoming suffering and the cycle of death and rebirth, either by the attainment of Nirvana or through the path of Buddhahood. This can be achieved by observance of moral precepts, monasticism, meditation, and the cultivation of the Paramitas (perfections) Nacca (Pali : “Dancing”) means  movements of the body, particularly the feet, meant to express happiness (sukha) and usually done to the accompaniment of music.At the time of the Buddha, dance had not yet developed into an art and was most often associated with marriage, harvest festivals, drunkenness, sexual license or war.

In the southern districts of the Northern India there were religious ceremonies that included a great deal of singing, dancing, music and feasting. The Buddha disapproved of such dancing, saying that from the point of view of the monastic discipline it was a type of stupidity (and one of the eight Precepts that devout Buddhists will try to observe at least four times a month is abstention from dancing, singing, playing or listening to music ) However all Buddhist cultures developed their own traditions of both classical and folk dances associated or not  with the religion.

Tibet and Northern India with an infinite variety of cham dances

Sri Lanka with its Kandyan Dances

Thailand with its Four Faces of Buddha dance prayer

Myanmar with its oil lamp dance

(A thousand hand Guan Yin, a fusion with break dance , dances inspired by zen or nirvana) The cham dance (dance of the spirits)  is a lively masked and costumed dance associated with some sects of Tibetan Buddhism and Buddhist festivals. The dance is accompanied by music played by monks using traditional Tibetan musical instruments. The dances often offer moral instruction relating to karuna (compassion) for sentient beings and are held to bring merit (punya) -that is a beneficial and protective force which accumulates as a result of good deeds, acts, or thoughts – to all who perceive them.

Chams are considered a form of meditation and an offering to the gods. The leader of the cham is typically a musician, keeping time using some percussion instrument like cymbals, or dramyin ( traditional Himalayan folk music lute with six strings ) 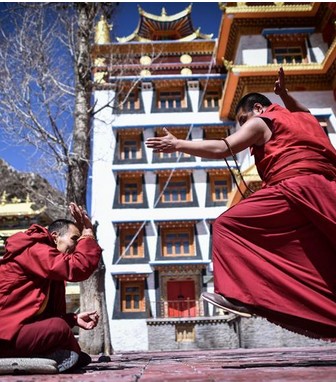 The debate of Tibetan Buddhist Buddhist monks is a unique means of learning, and also forms an important basis for obtaining a diploma by monks in Tibetan Buddhism, dating back over a thousand years of history.

In the Rab Monastery in Yushu Tibetan Autonomous Prefecture in Qinghai Province, nearly 100 Buddhist monks in purple robes are seated in groups in the courtyard in the middle of a monastery. In each group, someone is standing and asking questions, and then he hits the left palm with his right hand to the sky, which means that another crucial moment has arrived. Another person sits on the side and answers the question. In intense debates, we often hear people clapping, we see movements of the legs, these are the external signs of the collision of intense ideas.