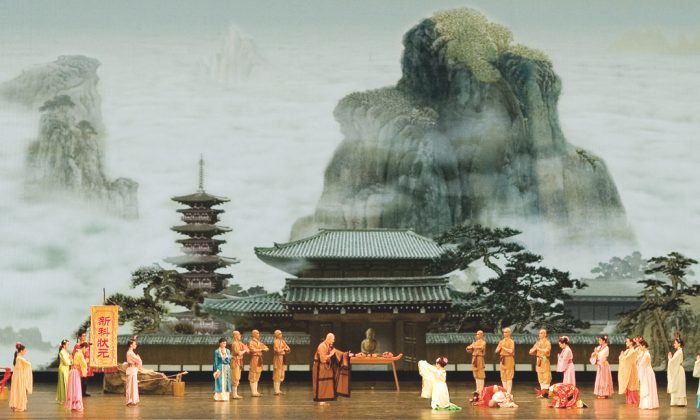 has  a 5000 years history during which spirituality evolves . Chinese spirituality spread to Korea which has an equally ancient history and later to Japan        .

“Chinese religion”, is the “background” religious tradition of the Chinese, whose practices and beliefs are shared by both the elites and the common people. This tradition includes veneration of forces of nature and ancestors, exorcism of harmful forces, and a belief that a rational order structures the universe, and such order may be influenced by human beings and their rulers. Worship is devoted to gods and immortals (shén and xiān), who may be founders of human groups and lineages, deities of stars, earthly phenomena, …..

Chinese popular religion is “diffused”, rather than “institutional”, in the sense that there are no canonical scriptures or unified clergy—though it relies upon the vast heritage represented by the Chinese classics—, and its practices and beliefs are handed down over the generations through Chinese mythology as told in popular forms of literature, theatre, and visual arts, and are embedded in rituals 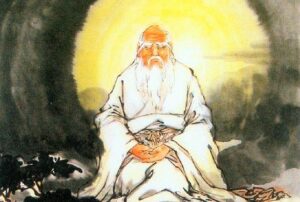 emphasises living in harmony with the Tao which is a fundamental idea in most Chinese philosophical schools. In Taoism, however, it denotes the principle that is the source, pattern and substance of everything that exists. Taoism is not emphasising rigid rituals and social order, but is teaching about the various disciplines for achieving “perfection” by becoming one with the unplanned rhythms of the universe called “the way” or “tao Its ethics tend to emphasise wu wei (action without intention), naturalness, simplicity, spontaneity, and the Three Treasures: compassion, “frugality, and humility.

Dao de jing (book of “the Way and the Virtue ») and  Zhuangzi are the two  foundational texts of Taoism.

Lao Tseu, whose  existence is historically uncertain, is considered à posteriori , the wise founder of taoïsm 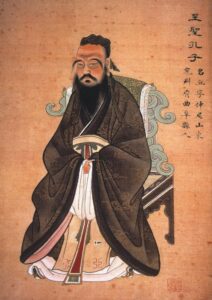 concerns the ideas of Confucius and his successors concerning principally the ethics in society and governing .Honesty, Fight against Corruption , Responsibility of those who manage others (from the Emperor to the Parents) Respect of Hierarchy …..He may be considered as the philosopher who influenced the largest number  of people in human historyThe Four Books and Five Classics  are the authoritative books of Confucianism in China written before 300 BCThe Book of Rites, also known as the Liji, is a collection of texts describing the social forms, administration, and ceremonial rites .It is a  core text of the Confucian canon Confucius and Lao Tseu lived in the 6th century BC Buddhism entered Han China via the Silk Road, beginning in the 1st or 2nd century CE 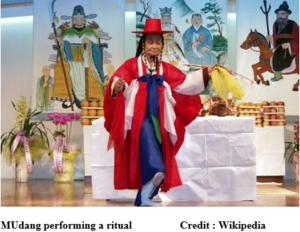 mu is  synonymous of the Chinese word wu . The mu are described as chosen persons.

Taoism or “Do” is thought to be the earliest state philosophy for the Korean people spanning several thousand years. However, its influence waned with the introduction of Buddhism during the Goryeo kingdom as the national religion and the dominance of neo-Confucianism during the Joseon dynasty. Despite its diminished influence during those periods, it permeated all strata of the Korean populace, integrating with its native animism as well as Buddhist and Confucian institutions, temples, and ceremonies. The Taoist practice in Korea developed, somewhat in contrast to China, as an esoteric meditative practice in the mountains taught by the “mountain masters” or “mountain sages”.

Korean Confucianism is the form of Confucianism that emerged and developed in Korea. One of the most substantial influences in Korean intellectual history was the introduction of Confucian thought as part of the cultural influence from China. Today the legacy of Confucianism remains a fundamental part of Korean society, shaping the moral system, the way of life, social relations between old and young, high culture, and is the basis for much of the legal system.

Dances In The History Of China And Corea

Depictions of dancing appeared over 4,000 years ago. The early dances may be folk dances or ritual dances, some of which developed into court dances.

The most important of the early dances served important ritual and ceremonial roles and are known as yayue which continued to be performed at the imperial court until the Qing dynasty.

The art of dance in China reached a peak during the Tang dynasty (618–907 CE) when numerous dances were recorded. Dancing as an individual art form declined in the later eras

In more recent times dance has enjoyed a resurgence, and it is widely performed by the public and professionals alike.

There are continuous written records of Chinese dances for over two thousands years. Some forms of dancing still performed today, for example, dancing with long sleeves has been recorded at least as early as the Zhou dynasty (c. 1045–256 BCE).

Some of the best-known Chinese dances, such as the Lion dance, can also be traced to theTang dynasty or earlier, while others may have existed different forms in the early eras, while others were known from at least the Song era. While many Chinese dances have ancient pedigree, dance is also a continually evolving art form and modern developments in Chinese dances are continuing apace.

A number of different dances gained permanent high status, including the Hermit dance, the Ghost dance, Buchae Chum (the fan dance), Seung Mu (the Monk dance), the Oudong (Entertainer) dance and others, despite the fact that many had humble origins. For example, the Fan dance is believed to have originated with shamans performing nature rites with leaves but evolved into one of the most highly refined Korean dances.

Other Korean dances remained and remain to this day under the ambit of farmers and folk dance groups. Props used in the dances include the long billowing silk scarf of pure white used in the Salpuri dance, drums, hats, swords and others. The props may be peripheral or central to the story of the dance. In the Ghost dance, the entertainer has a joyous reunion with a deceased spouse, only to endure the heartbreak of reseparation, and there may few or no props. On the other hand, the Great Drum dance (one of several forms of drum dances) features a gaudy drum which may be taller than the performer. The drum tempts a monk until finally he succumbs to it and performs a rolling drum “orgy.”