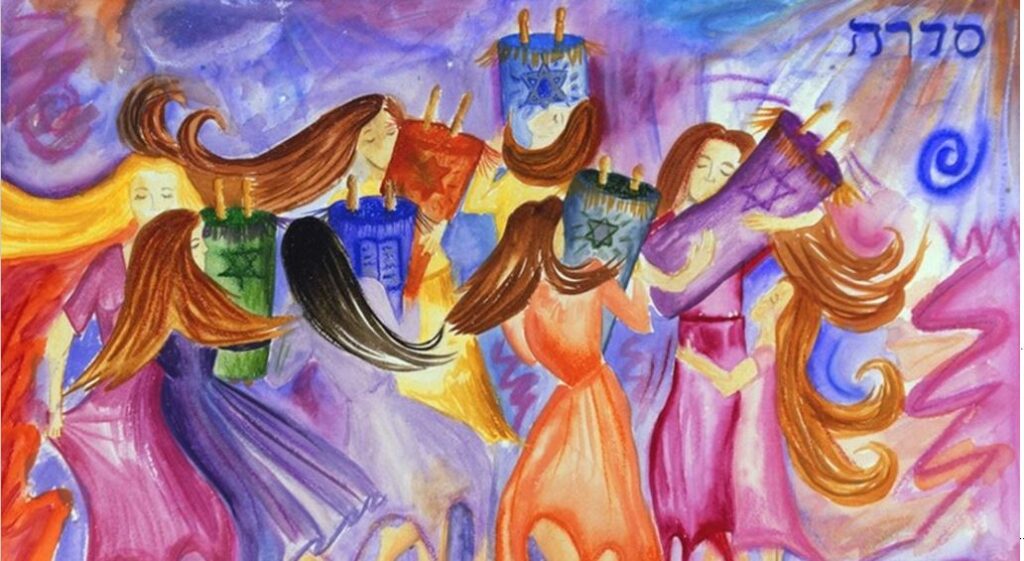 Judaism represents a most ancient monotheism

It  is an ethnic religion comprising the collective religious, cultural and legal tradition and civilization of the Jewish people. It encompasses a wide body of texts, practices, theological positions, and forms of organization. The Torah is part of the larger text known as Hebrew Bible (Tanakh) , and supplemental oral tradition represented by later texts such as the Midrash, the Talmud and the Zohar.

Within Judaism there are a variety of movements, most of which emerged from Rabbinic Judaism, which holds that God revealed his laws and commandments to Moses on Mount Sinai in the form of both the Written and Oral Torah

Today, the largest Jewish religious movements are Orthodox Judaism, Conservative Judaism, and Reform Judaism. Major sources of difference between these groups are their approaches to Jewish law, the authority of the Rabbinic tradition, and the significance of the State of Israel.

Orthodox Judaism maintains that the Torah and Jewish law are divine in origin, eternal and unalterable, and that they should be strictly followed.

Authority on theological and legal matters is not vested in any one person or organization, but in the sacred texts and the rabbis and scholars who interpret them.

Judaism’s texts, traditions and values strongly influenced Christianity, Islam and the Baha’i Faith. and played a seminal role in the formation of Western civilization

Jews are an ethnoreligious group including those born Jewish, in addition to converts to Judaism.

There are numerous jewish ethnic groups as the diaspora covers the planet !

The principal are Askenazi, Sephardi and Misrahi 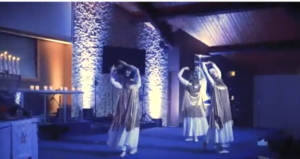 Dance was an integral part of the celebrations of the ancient Israelites. It was used both in worship in ordinary life and on occasions of triumphant victory and festivity.

In many Old Testament biblical allusions to, and descriptions of, dance there is no disapproval, only affirmation of this medium of worship.

However, dance is not mentioned formally in the Mosaic code, nor was the movement free of certain prohibitions

When dance is mentioned in the Old Testament it is distinguished by its joyousness. Words such as leaping and whirling describe the energy and vitality of ancient Hebrew dances. The most frequently used root for the word ‘dance’ in the Old Testament is hul which refers to the whirl of the dance and implies highly active movement. Of the 44 words in the Hebrew language for dancing, only in one is there a possible reference to secular movement as distinct from religious dancing

Weddings provided another important occasion for ritual dancing. Dancing with the bride was considered an act of devotion, and the officiating rabbi always complied with pleasure. During the Diaspora of the early Christian Era many of the ritual dances disappeared, but the bridal dance continued as a tradition. In the Middle Ages wedding dances were performed in which men danced with the bridegroom and women with the bride because of the segregation of the sexes. Later, men could dance with the bride either by wrapping their hands in a cloth or by holding a cloth between them to signify their separation. 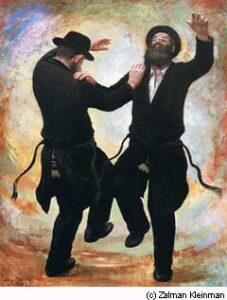 In the 18th century, in Eastern Europe, A movement of religious renewal called Hassidism insists on joyful communion with God, that must express itself by singing and dancing that is, by the body and not by the mind .It remains still much alive in our days through the current Loubavitch,. One of the major innovations of Hassidism was the introduction of collective dances to celebrate this Communion. However,  in Hassidic dances, men and women are separated and women are practically absent .

A selection of Jewish Dances and Stories

The “Rejoicing with/of the Torah” holiday celebrates and marks the conclusion of the annual cycle of public Torah readings, and the beginning of a new cycle.

The main celebrations of Simhat Torah take place in the synagogue during evening and morning services. In Orthodox as well as many Conservative congregations, this is the only time of year on which the Torah scrolls are taken out of the ark and read at night. In the morning, the last parashah (section) of Deuteronomy (last book of Torah) and the first parashah of Genesis (1st book of Torah) are read in the synagogue. On each occasion, when the ark is opened, the worshippers leave their seats to dance and sing with the Torah scrolls in a joyous celebration that can last for several hours.

Across Israel, tens of thousands of people gather in the evening at the Hakafot Chnioth (processions with Torah scrolls) which close the feast of Simhat Tora.

is a form of dancing based on hopping in place.It  is frequently incorporated in public dancing at Jewish weddings and celebrations. The Inbal Dance Theater specializes in Yemenite dancing in Israel

Dances associated with Ashkenazi and Sephardi traditions,especially Jewish wedding dances, are an integral part of Jewish life around the world

Since the 16th century, dancing was an important part of Jewish festivities in Eastern Europe, especially weddings. But no Ashkenazi Jewish dance was community specific: most of the repertoire – line, circle, pair, etc. dances – was cosmopolitan or included elements borrowed from the non-Jewish environment.

However, Jews used body language that differentiated them from non-Jews who performed the same dances, especially in arm and hand movements, as well as footwork in young men.

The Ashkenazi gestures were strongly inspired by language and ethical considerations no doubt also played a role.

During weddings, an important part of the ritual consisted of dances aimed at honoring the bride (“mitzve tants“) or distinguished guests, stepfathers, ancestors, rabbis present, etc. or even to mimic feelings like  anger followed by then reconciliation

Rabbi Israel Baal Shem Tov (1698-1760), the founder of the Chassidic movement, was once asked: “Why is it that Chassidim burst into song and dance at the slightest provocation? Is this the behavior of a healthy, sane individual?”

The Baal Shem Tov responded with a story:

Once, a musician came to town — a musician of great but unknown talent. He stood on a street corner and began to play.

Those who stopped to listen could not tear themselves away, and soon a large crowd stood enthralled by the glorious music whose equal they had never heard. Before long they were moving to its rhythm, and the entire street was transformed into a dancing mass of humanity.

A deaf man walking by wondered: Has the world gone mad? Why are the townspeople jumping up and down, waving their arms and turning in circles in the middle of the street?

“Chassidim,” concluded the Baal Shem Tov, “are moved by the melody that issues forth from every creature in G‑d’s creation. If this makes them appear mad to those with less sensitive ears, should they therefore cease to dance?”

The Elder Brothers of Christians

After two thousand years of enmity and following Vatican II , the Catholic Church tried to repair  the harm done to the Jews . In his historical speech in the  Synagogue of Rome on april 13th 1986 , pope Jean Paul II addressing himself to the Jewish community , stated  :

“You are our favorite brothers and, in a way, our elder brothers”

Pope Francis meeted with Rabbi Edgar Gluck, chief rabbi of Galicia, at the Vatican on May 8, 2017 A group of Hasidic Jews, led by Rabbi Edgar Gluck serenaded the Pope with the Hasidic song titled “Long years shall satiate him” and the pope danced with them

How catholics see the Jewish feasts of Automn