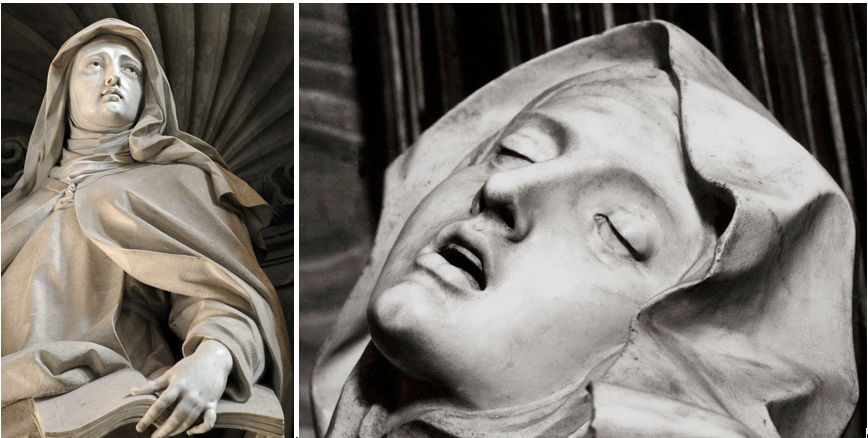 Her Life and Spirituality

Teresa of Ávila also called Saint Teresa of Jesus (1515–1582) was a Spanish noblewoman who felt called to convent life. A Carmelite nun, prominent Spanish mystic, religious reformer, author, theologian of the contemplative life and of mental prayer, she earned the rare distinction of being declared a Doctor of the Church.

Her written contributions, which include her autobiography, The Life of Teresa of Jesus and her seminal work The Interior Castle, are today an integral part of Spanish Renaissance literature. Together with The Way of Perfection, her works form part of the literary canon of Christian mysticism and Christian meditation practice and continue to attract interest from people both within and outside the Catholic Church.

She continues to be widely noted as an inspiration to philosophers, theologians, historians, neurologists, fiction writers and artists, as well as to countless ordinary people interested in Christian spirituality and mysticism.

The ultimate preoccupation of Teresa’s mystical thought, as consistently reflected in her writings, is the ascent of the soul to God in four stages:

1. Devotion of the Heart, consists of mental prayer and contemplation.

2. Devotion of Peace, is where human will is surrendered to God. This occurs by virtue of an uplifted awareness granted by God, Although a partial distraction can happen, due to outer activity such as repetition of prayers or writing down spiritual things, the prevailing state is one of quietude.

3. Devotion of Union, concerns the absorption-in-God. It is not only a heightened, but essentially, an ecstatic state. At this level, reason is also surrendered to God, and only the memory and imagination are left to ramble. This state is characterized by a blissful peace.

4. Devotion of Ecstasy, is where the consciousness of being in the body disappears. Sensory faculties cease to operate. Memory and imagination also become absorbed in God, as though intoxicated. Body and spirit dwell in the throes of exquisite pain, alternating between a fearful fiery glow, in complete unconscious helplessness, and periods of apparent strangulation. Sometimes such ecstatic transports literally cause the body to be lifted into space. This state may last as long as half an hour and tends to be followed by relaxation of a few hours of swoon-like weakness, attended by the absence of all faculties while in union with God. The subject awakens from this trance state in tears. It may be regarded as the culmination of mystical experience.

Teresa was said to have been observed levitating during Mass on more than one occasion.

Throughout her writings, Teresa returns to the image of watering one’s garden as a metaphor for mystical prayer. 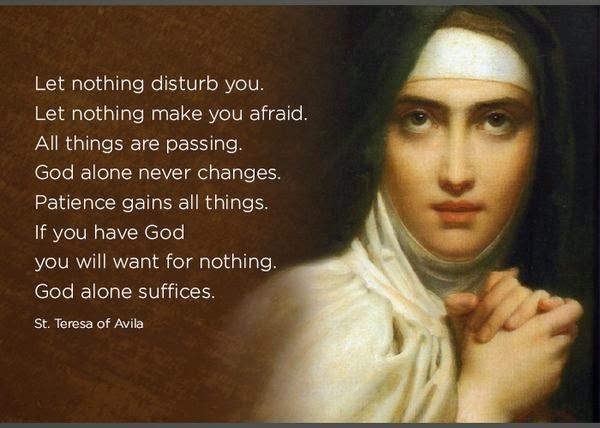 “La petite sentinelle” – a catholic blog for children  – starts an article on Teresa as follows:

“Saint Teresa of Avila was deeply cheerful, she loved to dance and slam castanets when she was a child and later, this is how the new Carmelite nuns  were welcomed into her convents!”

Sophie Lespinasse – in a carmelite seminar – provides the informations and thoughts to prove that Teresian spirituality is a spirituality in action- even during contemplation – whose driving force is love.

The two lives – active and contemplative – go hand in hand in a double  movement of which the symbol is the cross. The horizontal one goes towards her fellow humans, the vertical one towards God. In the center of the cross lies the painful and liberating experience of the union with the Divine!

It is said that Teresa danced during Christmas  celebrations holding baby Jesus in her arms.

Anne de St Barthelemy who was close to Teresa quotes :

“I send you verses that you ask me … then dance in the choir. As we danced so much next to the cells ...”.

It is mainly through oral transmission in Carmels that we know that Teresa danced, especially during recreation. She rarely mentions dance explicitly, except in some cases as in the following letter where she sites a welcome speech to her honor when she visits a monastery: “Mother Founder has come in our recreation. Let’s dance and sing and chime, chime”.

Teresa presumably danced in a spontaneous and improvised way, inspired of the contemporary dances.

Anyway there was no possible expression to satisfy Teresa’s desire to share her overflowing joy.

Some thoughts of conclusion

-The more deeply or highly we penetrate in spirituality (whichever it is), there are more chances that dance will be a means of expression and christian mystics are less hostile to dancing.

“We are not angels, we have a body. It’s craziness to wish to be in a state of angel, when we are on earth”

However, even in our days some faithful persist to consider the body with suspicion.

Inside Christianity – which is a religion of incarnation – is developed progressively a theology of the Body. So theologians will have to consider which is the right place of the art of dance inside the church and particularly the subjects and questions raised when Dance becomes Prayer.