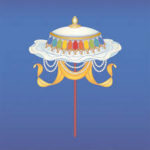 THE MARVELLOUS WORLD OF BUDDHIST DANCES 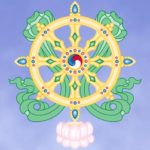 A Korean Buddhist ceremony which re-enacts Siddhartha Gautama delivering the sermon known as the Lotus Sutra. Primarily preserved and conducted by the Taego Order of Chan Buddhism, the ceremony, which takes place annually on June 6, includes tea ceremonies, prayers, rites of purification, offerings to Buddha and rites for the dead.

The Kandyan, or up-country dances, are regarded as the classical dance tradition of Sri Lanka

The South Indian form, and particularly the influential form of Kerala is said to have arrived during the early 18th century, when the King of Kandy invited dancers and musicians from Kerala to his court.

However, it is possible that it was only one more wave of Indian influence, since probably some of the Buddhist music and dance traditions may have already been adapted from India in the centuries BC when Buddhism was received in Sri Lanka.

In the oil lamp dance, the traditional oil lamp offered to the Lord Buddha is a lighted wick of cotton soaked in an oil-filled earthenware saucer is the centerpiece of the dance. A lighted candle now usually substitutes in its place. The Rakhine people of western Burma incorporate the oil lamp dance in many of their traditional dances, mostly devotional, to the Buddha.

The performer’s hands are always upturned (to retain the oil). Elders who remember performing with traditional lamps say that the secret is to not let the lamp drop while, at the same time, conveying particular expressions with various attitudes of the hands and legs. “It is almost an ordeal”, they added.

Obon (お盆) or just Bon (盆) is a Japanese Buddhist custom to honor the spirits of one’s ancestors. This Buddhist-Confucian custom has evolved into a family reunion holiday during which people return to ancestral family places and visit and clean their ancestors’ graves when the spirits of ancestors are supposed to revisit the household altars. It has been celebrated in Japan for more than 500 years and traditionally includes a dance, known as Bon Odori

Was a form of Buddhist processional dance drama, which reached Japan in the 7th century from Central Asia through Korea and China. Gigaku blended religious themes with comedy, and even burlesque scenes, while the performances took place in temple courtyards. Its performance tradition died out in the Heian period (794–1192). Wooden gigaku masks are now valued as high-quality artefacts.

Ballet performance by Japanese dancer, Shunso at the Opening Event

is a dance created by the chinese choreographer Zhang Jigang , performed by 63 deaf dancers from China and inspired by Guanyin , the Buddhist bodhisattva associated with compassion.

One buddhist legend presents her as vowing to never rest until she had freed all sentient beings from  cycle of rebirth. As she attempted to reach out to all those who needed aid, she  found that her two arms shattered into pieces. Then the buddha  Amitābha came to her aid and appointed her a thousand arms to let her reach out to those in need.

Fusion of break dance and Buddhism

Two young monks from different Buddhist sects have formed a break-dancing duo named Kaiten Bozu (spinning monks). The duo believes that the unique fusion of Buddhism and dance will surely appeal to the younger generation because dancing is something everyone can enjoy equally, which echoes the teachings of Buddhism.(Break dancing is a candidate to be added to the 2024 Paris Olympics).

was created by Sun Ock Lee, a Korean Zen Buddhist, dancer, and choreographer.

It  mingles traditional Korean forms and other Asian idioms such as Cambodian, Tibetan, and Nepali dance, Buddhist mudras, and video installation, often using rice paper costumes and sets that evoke Korean folk customs as well as dharmic ideas of transience and transformation

a hypnotizing dance show from Korea, toured Israel in 2011 after being presented in nearly 50 countries. The show, was based on ancient ritual Buddhist dances. About 90 artists – dancers, Kodo drummers and musicians performing on other traditional instruments –appeared on stage.

“Nirvana is not just another ethnic dance show but a religious dance that is performed on stage. For ages, this dance has been used to explain and teach people the philosophy of Buddhism. This dance is also part of the religious training of Buddhist monks,” explains Kim Eung-ki, a Buddhist monk, renowned scholar and teacher.