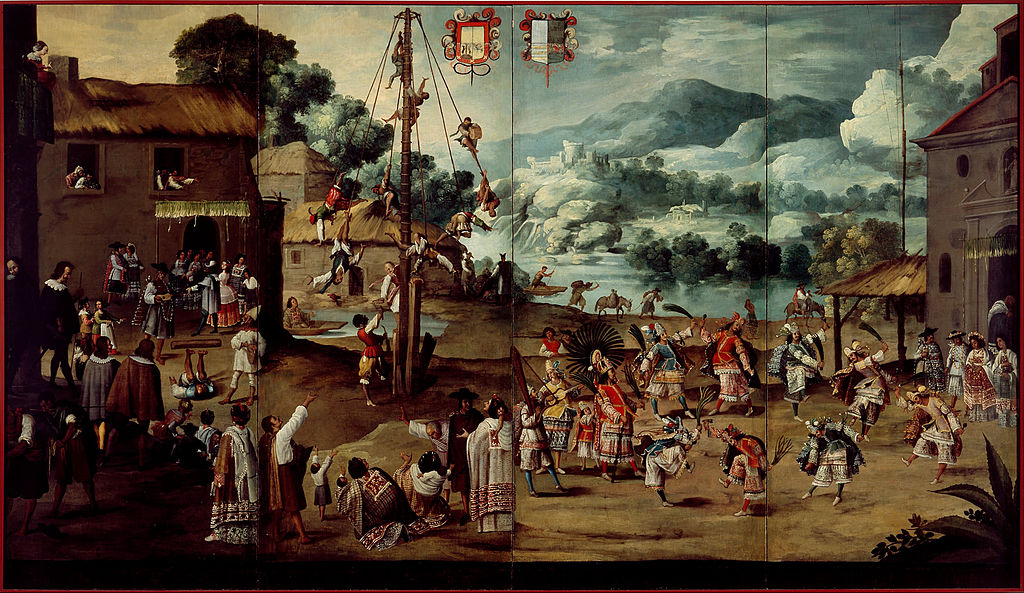 Indigenous of Central and South America

The most important people of the central and south America are the Chibchas (Central America) , the  Quechuas (West Coast) depositaries of the inca civilisation , The  Aymaras (Bolivian Altiplano and South Peru) bearers of Tiwanalu culture disappeared in the beginning of the 2d millenary, the Mapuches or Araucans(South Chile and Argentina) resisting to Incas , to  Conquistadors and to Chilians till the 20th Century, the People of Amazonia (ex, Guaraní…)

Indigenous people of South and Central America  were traditionally hunter-gatherers—and many, especially in the Amazon basin, still are; However some groups practiced aquaculture and agriculture and  in some regions they created organized cities, city-states, and even empires  like Aztec, Inca and Maya states that until the 16th century were among the most politically and socially advanced nations in the world.

Some indigenous peoples still live in relative isolation from Western culture and a few are still counted as uncontacted peoples.

Dances with strong african influence are examined in the Carribean Section

The circumscribed ceremonial roles of Aztec actor-dancers reflected the social structure comprising priests, nobles and warriors, commoners, serfs, and slaves. The priestly and noble-warrior classes took active roles in the many festivals of the Aztec calendar, and the priests trained noble youths for the priesthood or in dancing and singing. Warrior youths performed ceremonial combat, and the warrior orders of the eagle and of the ocelot fought captive slaves during certain festivals.

Dance was a central component of social, religious, and political endeavours for the ancient Maya. The entire community danced, including kings, nobles, and common people. Dance served many functions such as creating sacred space, closing the gap between here and the otherworld.

The Dance of the Pascolas and the Deer is a ritual that has been practiced for over 300 years as a call for rain to the gods, and is studied by specialists from the National Institute of Anthropology and History (INAH), who are currently working on the creation of a file in order to include this practice on the Tentative List of Intangible Cultural Heritage, of the United Nations Educational, Scientific and Cultural Organization (UNESCO). 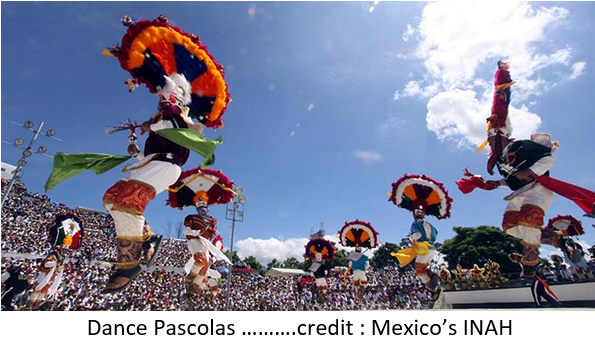 The peyote (hikuli) dance, held in November, follows Huichol and Tarahumara pilgrimages . The dance of the Huichol is the more ecstatic. After consuming the trance-inducing peyote, men and women move in a counterclockwise progression, leaping jerkily and twisting their bodies.

One most important  Huichol ceremony is the “Dance of the Deer.”  People  dance their prayers into the altar of Mother Earth and  connect with the Deer Spirit, a very important Huichol animal power. The deer is seen as an elder brother, a guide, which the shamans use to navigate the spirit realm and also for healing. In the Huichol mythology, the gods and goddesses taught the deer in ancient times. It was the first student  to learn the secrets of the original shaman, Grandfather Fire. 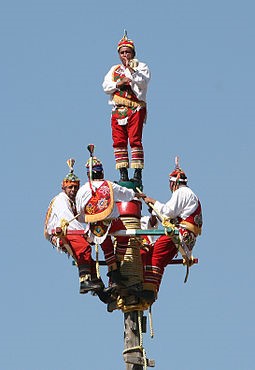 The  Dance of the Flyers is an ancient Mesoamerican ceremony/ritual still performed today, albeit in modified form, in isolated pockets in Mexico. It is believed to have originated with the Nahua, Huastec and Otomi peoples in central Mexico, and then spread throughout most of Mesoamerica. The ritual consists of dance and the climbing of a 30-meter pole from which four of the five participants then launch themselves tied with ropes to descend to the ground. The fifth remains on top of the pole, dancing and playing a flute and drum. According to one myth, the ritual was created to ask the gods to end a severe drought. The ceremony was named an Intangible cultural heritage by UNESCO.

Moriscas, ritual dances deriving from ancient European ritual dances, abound during Carnival (the week before Lent begins) but also occur at Corpus Christi (second Thursday after Pentecost), Santiago (St. James Day, July 25), and on other feasts. In the drama of moros y cristianos, two factions mimetically tangle inarguments and battle with the ultimate victory of the Christians and the conversion of the Moors.

Many dances of the Morris–morisca family employ swords.

(There are three types of European-influenced dance-dramas: the morisca and its variants, moros y cristianos, santiagos, matachini, and related plays; Passion plays; and posadas, pastorelas, and Guatemalan loas. These are often true dramas, with dance and music. The dialogue may be in Spanish or in an indigenous language or a mixture of both.)

Considered dancing as a social activity and it was only done during festivals and rituals. When they did dance, they were very formal and involved either just men or women although occasionally both genders danced together. The also performed war dances

The most important celebration was Inti Raymi , held on the winter solstice and concerned the rebirth of the Sun the beginning of the Inca year as well as the mythical origin of the Inca. It lasted 9 days during which dances and sacrifices took place.

Nowadays , Inti Raymi is a  show aimed at both tourists and residents of Cuzco, for whom it represents a point of reference for their local awareness and cultural belonging. For these reasons it attracts enthusiasm and massive participation. The performance, in which thousands of people intervene, begins in front of Coricancha, where the Inca performs an invocation to the Sun. The spectators, meanwhile, wait on the Sacsayhuamán esplanade, towards which the procession moves immediately. An alpaca is sacrificed , and the Inca invokes his father the Sun.

Religious beliefs involve a variety of supernatural beings, including a supreme god, regional deities, deified ancestral spirits, and the spirits of the recently deceased, which are the Mapuche’s closest connection to the realm of the supernatural. Religious practitioners are either shamans (machis), who lead rituals, and practice medicine, or witches (kalkus), involved with malevolent spirits and practices. Their most important religious ceremonies are Ñillatun and Awn. Ñillatun is an agricultural rite for general protection and prosperity, and Awn are funeral rites, which are important for getting souls of the recently deceased to the afterlife.

Pehuenche (which means people of the monkey puzzle tree) concerns Indian dance and horse riding. Young men ride and dance vigorously around young monkey puzzle tree to disperse any evil spirits. The festival is both a thanks giving for previous harvest, and offerings to ensure future harvest.

(Waynu in Quechua) is a genre of mornful mixed  inca-spanish  practiced by a variety of ethnic groups, especially Quechuas It dates back to colonial Peru as a combination of traditional rural folk music and popular urban dance music. High-pitched vocals are accompanied by a variety of instruments,. Some elements come from  the music of the pre-Columbian Andes.

The dance begins with the man offering his right arm to the woman as an invitation for her to dance Next, the partners walk along an enclosure, and finally they dance. The dance consists of an agile and vigorous stamping of the feet during which the man follows the woman, opposite to front, touching her with his shoulders after having turned around, and only occasionally he touches his right arm to the left hand of his partner while both swing to the rhythm of the music.

Is an Argentine ritual drama which means “beautiful river,” as it is traditionally performed near the Rio Dulce.

On San Esteban’s Day, December 26, an avenue of arcos, or arches—made from trees that have been stripped of their branches except for a tuft on top and tied together by cords hung with ichas (cakes in the form of puppets)—leads up to a church altar. The drama begins at dawn with trumpets and fireworks, followed by a slow procession of men on horseback through the arches. The rest of the drama unfolds throughout the day, culminating in the demolition of the arcos and the eating of the ichas. A fiesta concludes the celebration.

The sumamao is primarily an agricultural ritual aimed at winning the favor of the gods by offering sacrifices and exorcizing evil spirits. Social dances—including the zamba, the gato, and the chacarera —have replaced the orgiastic behavior that followed the ritual in ancient times.

They actually consist of 2/3 millions in 200 tribes (instead of 2000 before the European contact). Their music and dance is often part of religious ceremonies

Those  native peoples play instruments including whistles, flutes, horns, drums and rattles. Much of the area’s folk music imitates the sounds of the Amazon Rainforest.

The earliest music in what is now Brazil must have been that of the native peoples of the area. Little is known about their music, since no written records exist of this era.

The Tukano people chant and dance in long lines with their arms over each other’s shoulders . They take short quick steps to the sounds of shakers filled with seeds.

The Caboclino dancers wearing maracas, whistles, feather ornaments on the belt and ankles, as well as necklaces, dress like Indians and represent scenes of hunting , harvest and combat. It is performed to the quick beat of pipes, drums and rattles called caracaxas . Dancers wear short skirts , arm and leg bands and elaborate headdresses

It is estimated that the tradition was created in the late 19th century. The dance emulates symbols of resistance from indigenous and African peoples, who were enslaved here. With a bow and arrow in hand, participants produce “dry” sounds while bending and rising. The tradition is linked to the cult of Jurema, a tree native to Brazil.

This folk dance from Pernambuco, has become an Intangible Cultural Heritage of Brazil.