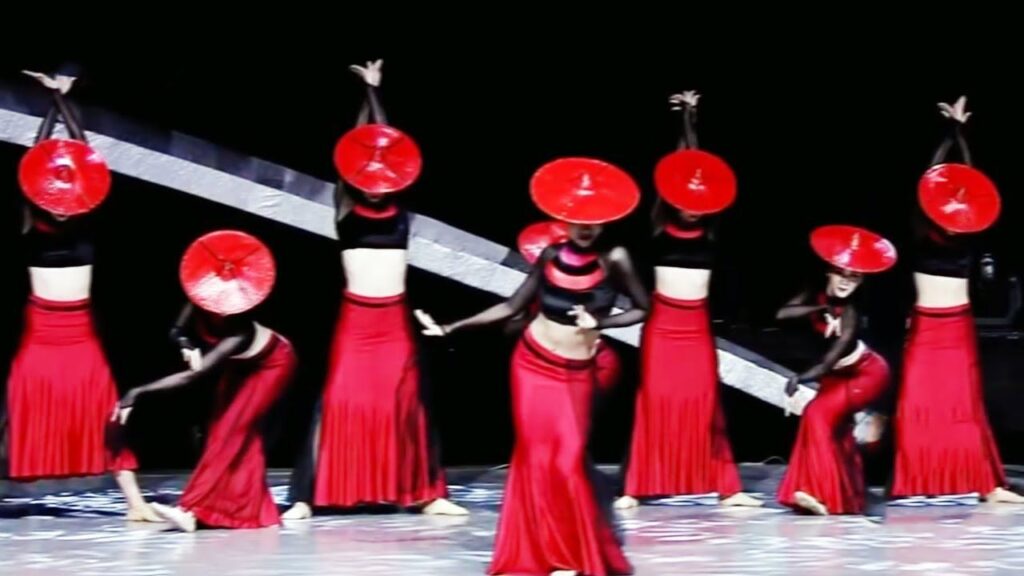 Dance in China is a highly varied art form, consisting of many modern and traditional dance genres. The dances cover a wide range, from folk dances to performances in opera and ballet, and may be used in public celebrations, rituals and ceremonies

There are also 56 officially recognized ethnic groups in China, and each ethnic minority group in China also has its own folk dance.

Many of the folk dances are related to harvest and hunting and the ancient gods associated with them. Rulers from various dynasties collected folk dances, many of which eventually became court dances

The most important dances of the early period were the ritual and ceremonial music and dances called yayue, and these dances were performed at theimperial court until the Qing dynasty, but only survive today as performances in Confucian ceremonies.

So, Countless are the dances which  have spiritual roots.

Is a form of traditional dance in Chinese culture and other Asian regions (Japan, Korea, Tibet Vietnam and Indonesia) in which performers mimic a lion’s movements in a lion costume to bring good luck and fortune. The lion dance is usually performed during the Chinese New Year and other Chinese traditional, cultural and religious festivals. It may also be performed at important occasions such as business opening events, special celebrations or wedding ceremonies, or may be used to honour special guests by the Chinese communities.

The Chinese lion dance is normally operated by two dancers, one of whom manipulates the head while the other forms the rear end of the lion.

There are two main forms of the Chinese lion dance, the Northern Lion and the Southern Lion which predominates in the South East Asia.

The traditional dragon dance began as a ceremony for worshiping ancestors and praying for rain. It later became more of an entertainment, often performed during Chinese New Year. In Chinese culture, dragons symbolize wisdom, power, dignity, fertility, and auspiciousness, and have also become a symbol of Chinese culture itself. Odd numbers of the dragon’s joints are regarded as auspicious, so people often make an odd-numbered jointed dragon puppet. Right before the dance, the head and the tail of the dragon are connected to its body. Then, someone holding a rod with a large ball at the top leads the dragon during the dance. As the dragon follows the ball’s movement—left and right, back and forth, up and down, and thus moving in waves—it appears to be dancing.

The performance of ritual dance during Han was a court prerogative, and the number of dancers permitted to each noble was regulated according to his rank and merit. This thin elegant dancer (left picture) is dressed in the traditional shen yi garment; long and layered robes with oversized sleeves. She captures the stately motion and austere spirit of the “sleeve-tossing dance” style (chang xiu wu) which featured a continuous, controlled and coordinated movement of the long sleeves. The Han dynasty writer Zhang Hong (78-139) described this dance form in one of his poems: Their vermilion slippers danced between plates and goblets And they waved their long, dangling sleeves With a curvaceous, cultivated bearing Their lovely dresses fluttered like flowers in the wind.

Ancient Han people were good at producing silk, so they would have very soft clothes . Rich people and nobles like to wear wide sleeves and long sleeves to show off their wealth and status.

Pure Brightness Festival or Clear Bright Festival, Ancestors Day or Tomb Sweeping Day is a traditional Chinese festival on the 104th day after the winter solstice usually occurring around April 5. Its name denotes a time for people to go outside and enjoy the greenery of springtime and tend to the graves of departed ones.

The Qingming Festival is an opportunity for celebrants to remember and honour their ancestors at grave sites. Young and old pray before the ancestors, sweep the tombs and offer food, tea, wine, chopsticks, joss paper accessories, and/or libations to the ancestors. The rites have a long tradition in Asia, especially among farmers..

On Qingming people go on family outings, start the spring plowing, sing, dance. Qingming is also the time when young couples start courting. Another popular thing to do is to fly kites in the shapes of animals or characters from Chinese opera. Another common practice is to carry flowers instead of burning paper, incense or firecrackers.

The Qingming is a  Chinese national intangible cultural heritage.

Was originally a court dance , but adopted to form part of a Confucian ceremony

The state cult of Confucius centred upon offering sacrifices to Confucius’s spirit in the Confucian temple.

This  dance known as the Eight-Row Dance consisting of eight columns of eight dancers each, was also performed. Originally this was a Six-Row Dance, as performed for the lesser aristocracy, but in 1477 Confucius was allowed the imperial honour of the eight-row dance since he posthumously received the title of king. Musicians who accompanied this dance played a form of music termed yayue.

In addition to worshipping Confucius, Confucian temples also honour the “Four Correlates”, the “Twelve Philosophers”, and other disciples and Confucian scholars through history.

The birthday of Confucius is celebrated all over China.