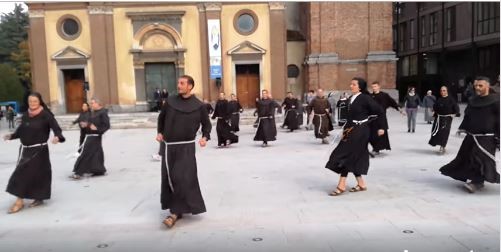 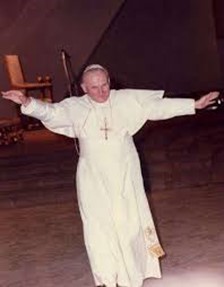 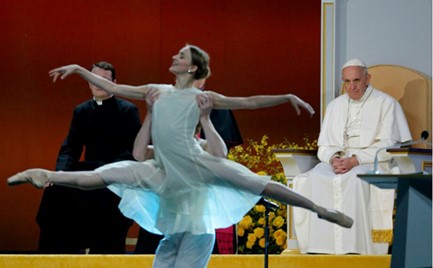 The evolution of the Church's attitude to Dance

The conservative point of view on dance

Though after Vatican II those aspects become more and more minority it is worth while to know them as they prevailed in Church for a very long time.

The general principle is Dance is an art turned to express beauty with the means at its disposal. Now, any art, whatever it is, while it expresses beauty is not intrinsically bad. It becomes bad insofar as it is favors bad morals.

This principle is translated as follows :

– Although some folk dances may be acceptable , it must be remembered that the waltz and the polka were condemned, since they involve embraces, a romantic atmosphere or even the interlacing of fingers. Passions that arise from such dances and balls are considered deliberately provoked temptations.

– Looking at more contemporary times, Ortolan and other theologians condemn the performing arts, such as ballet, that involve tight clothing, pastel or skin colored apparel and revealing or transparent dresses. Such attire alone is deemed a grave sin against modesty and this is often compounded by the illicit and immoral positions and movements that are part of the dance itself.

– When one considers the kinds of dances condemned in the 1920s and 1930s – the waltz, polka, ballet and masquerade balls – it is not difficult to see that most of the dances we find in the 20th and 21st centuries are not fitting for Catholics:

Regrettably, almost all dances today are unacceptable by Catholic standards. Rock n’ roll, jazz, the twist, swing dancing, and nearly every other dance contrived in the last century – such as tango, samba, rumba, salsa, calypso and even more “conservative” dances like the blues, bolero and fox-trot – fall under the same restriction;

So, which are the characteristics of an acceptable dance ?

– The dresses are modest – no exposition of the body parts except the head, hands, lower arms and lower legs (skirts below the knees), no transparent or see-through clothing, no tight apparel that reveals the shape of the body, especially when it is skin colored;

– The positions are appropriate – no close embraces where the bodies touch; no leaning of woman’s head on the man’s shoulder; no faces touching; no interlacing of fingers.

– The movements are decent – no sensual twisting or vibration of the waist, no lifting of the legs or jumps that reveal what the dress covers, no fast twirling that allows the skirts to fly outward, no provocative positions of the derrières, no challenging protrusion of the breasts, no languid abandonment of the arms.

After Vatican II the attitude of the catholic clergy concerning dance has drastically evaluated.

Catholic clergymen , monks and nuns dance on several occasions . Some of them teach dances and some consider dance as a means to worship

This movement is much more intense in non western catholic churches , where clergymen not only dance but accept or promote dance even in the cult

An example of the attitude concerning tango is shown in next paragraph. TANGO in Rome now and a hundred years ago

“I love the tango a lot. It is something that comes from inside me.” This is what Card. Bergoglio (who became Pope Francis in 2013) declared in 2010  in an extensive interview published in the book The Jesuit by Sergio Rubin and Francesca Ambrogetti. He revealed himself to be an expert in the tango’s history. He is a fan of the great tango singers Carlos Gardel and Julio Sosa, as well as the contemporary composer Astor Piazzolla…….”I danced it as a young man although I prefer the milonga”.

In view of this enthusiasm, to commemorate the anniversary of the founding of Rome, the Mayor of the city and the Argentine Embassy in Italy took the initiative of promoting a night of tango on April 20, 2013  in homage to Pope Francis.

A hundred years ago this same dance was severely condemned  by Catholic Church :

On behalf of Pope  Pius X, the Vicar General of Rome Card. Basilio Pompili issued a Pastoral Letter in 1914 denouncing the tango as highly damaging to the soul. The Cardinal stated:

“The tango, which has already been condemned by illustrious Bishops and is prohibited even in Protestant countries, must be absolutely prohibited in the see of the Roman Pontiff, the centre of the Catholic religion.” (The New York Times, January 16, 1914)

The place of dance in the liturgy must always be examined in the light of the 1975 “qualified and authoritative sketch” published by the Holy See in the journal Notitiae. As you know, the article prescribes that in western cultures, dance “cannot be introduced into liturgical celebrations of any kind” and that when dances outside of the liturgy are envisioned, they may take place only “in assembly areas that are not strictly liturgical.”

“Dancing is not a form of expression for the Christian liturgy.”

So – theoretically – dance is still forbidden in Western Cultures , consequently allowed or tolerated  in others

What happens in reality?

In western cultures there are various attempts to introduce it , most of them inspired by protestant liturgical dance

In non western cultures there is a real boom of synchretism situations, in spite of some different opinions like beninese  father Maurice Hounmenou

Mass of the feast of the Ugandan Martyrs

Excerpt of a testimony “ …..As Holy Mass started, the procession entered from the back … Eight girls ranging from their teenage years to maybe 10 years old processed in wearing African attire and dancing to the very festive, yet reverent music being played by the choir. Behind the girls were two young teenage boys also wearing similar attire, but they were carrying spears and shields. Behind them were the three altar servers, lectors, extraordinary ministers of hospitality, and then the Deacon and Priest.

Read The Testimony by Tom Perna

Dance is often described as one of the most important, if not the most important, mode of cultural expression in Yap. At both Christmas and Easter liturgies, dance is even incorporated into Catholic worship, to communicate the importance of these days and to help tell the stories behind them. Yapese Catholics spoke about these dances as means to communicate what’s most sacred and deep about the Christian story in their own language and mode of expression.

Visit The Catholics And Cultures

Indian Rite of the Mass

The National Biblical Catechetical Liturgical Centre, NBCLC, a department of the Conference of Catholic Bishops in India, officially endorses and promotes this Indian Rite of the Mass.

The Mass is conducted following the rituals of a puja, a Hindu worship service. A group of girls dance and sing during parts of the Mass, their words and actions having symbolic meaning in Hinduism

The Indian Rite of the Mass is the fruit of decades of effort by the Indian Bishops Conference to “inculturate” the Catholic Faith to the religion of India.

Dance In Some Western Catholic Churches

Sisters of Charity In Cincinnati

While a physical prayer can be difficult to find, these Sisters of Charity show that the best prayers are the ones that use words and body alike. Sisters of Charity Mary Ann Humbert, Annie Klapheke and Joyce Richter have used their talent for liturgical dance to bring joy to Mass and themselves by celebrating with their graceful movements since 1980. 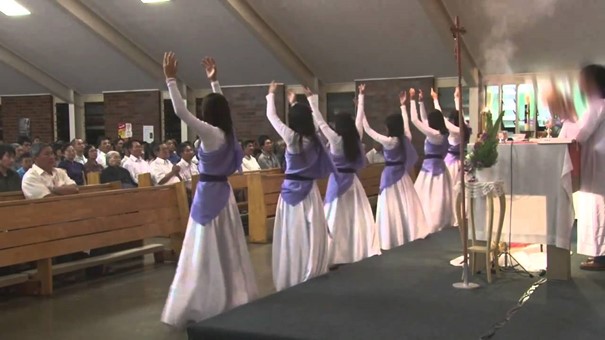 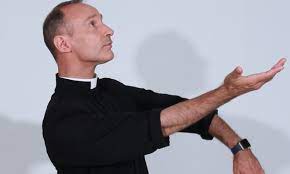 Former professional dancer, gold medalist from the Rouen Regional Conservatory, has not given up on his passion for dance. He presents himself as a “free and happy” priest in a Church in crisis.

He dances with the faithful, including sometimes during services.