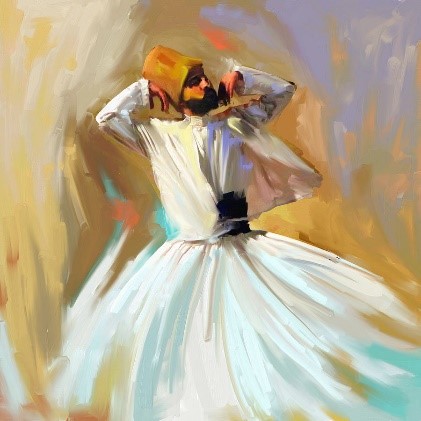 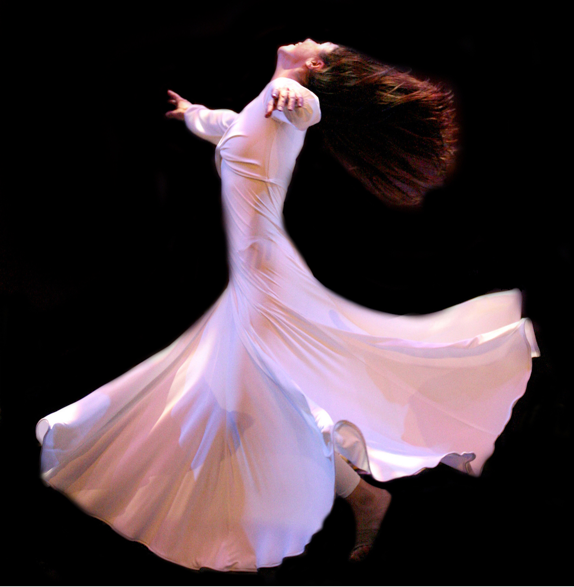 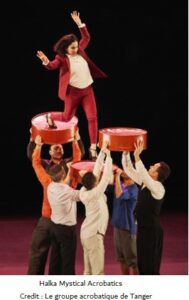 It is an art of Moroccan acrobatics inherited from Sufism.

This ancestral tradition was born in the 15th century in the brotherhood of the Sufi sage Sidi Ahmed Ou Moussa, defender of these artists. At the time, combatants of a particular kind gathered around him. Capable of climbing on top of each other in vertiginous human pyramids, these warriors were recruited to cross the enemy walls before being later used to identify, in the desert, foreign caravans or possible dangers .

Since then The tradition was perpetuated by families till now like a Tanger group founded by Sana El Kamouni.It is a spiritual art which is danced, sung accompanied by percussion, and  not just a technical feat. It has also a poetic dimension as

to each figure corresponds a Berber word, like Maâcuda which can be translated as “the jump of the gazelle in the desert”. Before being technical, each figure is first of all poetic, charged with a story. 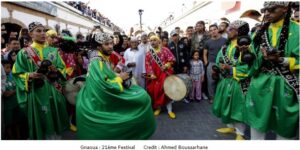 The Gnaoua are identified as a popular religious brotherhood whose therapeutic practices are the heritage of mystical cults of possession of the Sahel which had to metamorphose and adopt Islam as a religion to survive.

These practices have been transmitted by generations of sub-Saharan Muslims living in the Maghreb.

Rituals akin to the Gnaoua of Morocco also exist in Tunisia and in eastern Algeria (called Stambali and Benga), in Egypt (called Zār), and in Algeria except in the east (called Diwan or Bori Haoussa ) and in the Fezzan of Libya (Stambali)

The reasons for organizing a ceremony are diverse: celebration of a Muslim holiday, marriage, birth, circumcision, exorcism, search for healing or contact with the divine through ecstasy. The ritual is offered identically by all the Aïssâwa orchestras and includes recitations of mystical litanies, songs of spiritual poems, an exorcism ritual and a collective trance dance session. The fun aspects of the ceremony are common and claimed by the participants (laughs, songs, dances) as well as the ecstatic bodily manifestations (shouts, crying).

The experience crosses both the world of men and that of demons to culminate in the higher spheres, the meeting point of man and the divine.

The trance ritual practiced by the Aïssâwa today seems to have been established over the centuries under the triple influence of original Sufism, pre-Islamic animist beliefs and urban Arab poetry, like the Melhoun. In the cultures of the Horn of Africa and adjacent regions of the Middle East, Zār is the term for a demon or spirit assumed to possess individuals, mostly women, and to cause discomfort or illness. The zar ritual is the practice of exorcising such spirits from the possessed .  Each ritual is led by a priestess and aims to appease evil spirits through sacrificial gifts, incantation songs and dances

Probably, Zar was well developed in Northern Ethiopia and it  spread beyond the Horn of Africa at  the 18th or early 19th century, presumably introduced by Ethiopian slaves brought to the harems of the Ottoman Egypt .

Zār exorcism has become popular in the contemporary urban culture of Cairo and other major cities of the Islamic world as a form of women-only entertainment. Zār gatherings involve food and musical performances and they culminate in ecstatic dancing , lasting between three and seven nights. The tanbūra, a six-string lyre is often used in the ritual as well as the manjur, a leather belt sewn with many goat hooves, and various percussion instruments.

Traditional Egyptian dance which takes its name from the colorful skirt worn by the dancer. The tanoura is similar to the sama of the whirling dervishes of the Mevlevi order, but the two dances differ, both in form and in spirit.

In the form, several points distinguish the one and the other dance. If the sama is generally performed by several dancers, the tanoura is very often danced by a single man. The forehead girdled with one or more scarves, colorful and even illuminated skirts, distinguish it from the traditional wearing of the sikke and the spotted white skirt of the mevlevi dervishes.

Colored skirts were originally used to distinguish the different Egyptian brotherhoods, as well as their approach to religiosity. They can reach a weight of ten kilos. In both dances the dancer turns around the left foot, counterclockwise. The tanoura dancer has accessories – tambourines, parasols – with which he performs various figures.

In the spirit, the tanoura is first of all a festive dance, performed in Egypt during shows, concerts, festivals, or on the occasion of weddings. It does not take on the mystical quest for samā. It is an art that is passed down from father to son.

It is the only  Tannoura-sufi just with girls in Egypt.The choreographer is Ahmed Abd Elrazik – Luxor Folk Dance Group – It is the official Dancegroup of the Governorate of Luxor

Related to the notion of “mystical hearing”, it  designates a sacred gyratory dance of the Mevlevi Sufi whirling dervishes executed in the  semahâne (dance hall of the monastery). It is also called ayin. It appeared in Turkey in honor of the mystic Djalâl ad-Dîn Rûmî, and spread to Syria and Egypt.

The mystical poems sung in samā combine the themes of the lover and the beloved, of spiritual intoxication, of nostalgia for the separation from the beloved or from our divine essence. These inner states accentuated by dance are the effects of spiritual intoxication which results in a feeling of submersion and a forgetfulness of oneself, the outcome of which is the extinction in the divine presence.

Samā was inscribed on the intangible cultural heritage of humanity by UNESCO in 2008.

It is the sacred and purifying dance of the Chechens, Sufi Muslims, mystics. Invented 150 years ago by an illiterate shepherd, Kunta Hadji, it still signals today that the Chechens are closing their ranks, begging their God to forgive their sins and preparing for departure for the holy war. Banned in the 19th century by the Czarist power, the “Zikr” has never disappeared from Chechen life. It has also spread all around the world.

In the east of Turkey

Sufism and Dance in India

The Indian Sufi movement is very particular in a way that it developed a unique singing style called Qawwali and led to the creation of new branches in already existing classical and folk dance forms under the influence of Sufi mysticism. Scholars of Dance, culture and sociology believe that Dance and Music became an integral part of Sufi movement in India because of the intricate nuances of Hindu culture. Dance and Music as a way of praying, praising, reaching, spreading the love of God and raising one’s spiritual consciousness are Indian gifts which added to the Sufi movement. The fact that Hindus pray with music in the form of ‘Aarti’ hymns praising God and dance for their Gods and Goddesses in the form of ‘Jagran’  ( community spiritual/ritual dancing consisting of all-night vigil in honour of a deity and puja)’ along with ‘Garba’(dances performed in a circle around a central lamp or an image or statue of the goddess Shakti) and many more contributed to the addition of these elements in Sufism.

The Kashmiri equivalent of Persian Whirling Dervish dance. Dambali artists whirl and swing to the accompaniment of drum beaters. Fellow performers carrying long wooden masts called ‘alums’ form a circle around the Dambali dancers to provide a mystic ambience to the performance. The wooden alums have scarves tied to their tops like flags atop wooden masts.

Dambali is performed during the the Urs or Ziarats festival in Kashmir which is a huge inter-communal celebration with participation from Muslims, Hindus and Sikhs and is celebrated many times in a year.

The annual Urs of Lalbab Sahib in the Zakura area here witnessed a very few artistes performing the Dambali. After the conclusion of the Urs, the Dambali artistes carrying drums and alums walk to the shrine of Sheikh Humza Makhdoom atop the Koh-e-Maran.

It is a dance style that  borrows from Kathak, an Indian classical dance with both Hindu and Muslim roots, to express the mysticism of Sufi poetry and music. Best described by Ms. Chaturvedi, “the dance is a physical working out of one idea: the presence of the Almighty”. A Dance of Spiritual awakening that takes influence from the whirling Sufi dervishes.