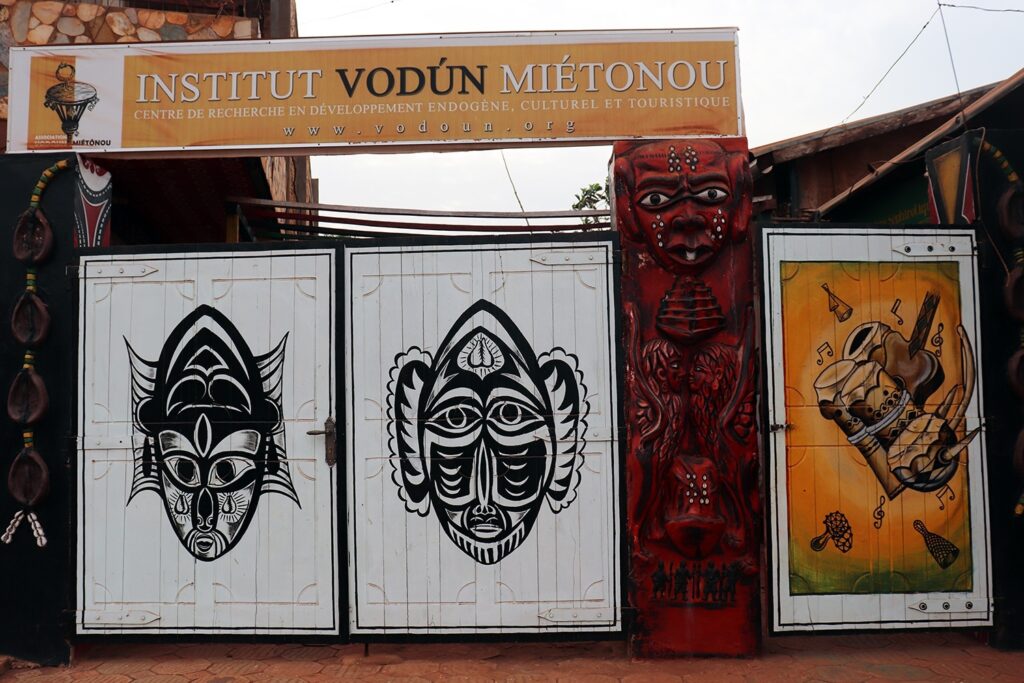 The Vodun Tradition in West Africa

The Vodun Spirituality includes a variety of notions, deities and rituals . Here are some of them :

Fâ (or Ifa) is a divinatory art traditionally practiced by the populations of the Gulf of Benin, as the Yoruba of Nigeria, Benin and the Fons of Benin. It is as much a science (geomancy) as well asa divinity presiding over the fate of man over his past, present and future by teaching him his deep links with nature through allegorical tales linked to each arcane. Key to vodun, it creates a language that allows men to communicate with God, through the Orishas, the ancestors and the deceased. The Fâ guides and enlightens man from his conception until his death and even beyond.

This divinatory art of ancient Egypt, passed by the Nile, then by West Africa Yoruba through Nigeria, then in the city of Ifé around the 17th century to reach Benin where it was adopted and adapted by the Fons.

Buriyan , also known as  “Bumba meu boi” takes place at   the celebration of Senhor Bomfim’s feast and corresponds to the memory and syncretisms of the Agouda community.

They are descendants of the liberated slaves  from and around Bahia who came back  to Benin with their customs and  their  way of life in Brazil , to which they were attached.
Among the customs was their  devotion to “Senhor de Bomfim”, celebrated with a ritual including dance and carnaval.
The celebration is preceded by a mass and followed by a picnic with tasty  Afro-Brazilian dishes.
The peak of the feast  is the appearance of Buriyan disguises  in the day preceding  the celebration with dances and acrobatics on “Samba” and “Bamba” rhythms. In the course of this nocturnal feast, various figures appear: the Buriyan (masked person), the ox (Oboi), the horse …. Le cheval amuse la foule par ses cavalcades. Many musical instruments are used

Buriyan’s mask is not a sacred mask. There are secrets that are no longer related to wearing a costume; it’s more for the purpose of involving the crowd. However, some aspects are not available to everyone so may be considered by some to be secrets of the mask.

Guèlèdé, is a ceremony practiced by the Yoruba-Nago community established in the Yoruba-Nago region in Benin, Nigeria and Togo. Songs in the Yoruba language, music by four tam-tam and masked dances take place at the end of the harvest, and during important events such as births, deaths, and weddings or in the event of drought or epidemic . The impressive effects of the ceremony make the Yoruba people say that “the eyes which have seen the Guèlèdé have seen the ultimate spectacle”

The city of Kétou in Benin ,is considered the birthplace of  Guèlèdé where it consists a secret society . The Guèlèdé is the tribute to pay to the mystical powers of women, from whom we must protect ourselves and who must be appeased in order to transform them into a beneficial power for society. To appease the “mothers” as it is customary to call them, the men put on their masks. With a light scarf and a dress with long sleeves, they hide their physiognomy; they tie bells to the ankles and dance.

Orisha – in the native religion of the Yoruba people – are spirits sent by The Supreme Creator Olodumare. for the guidance of all creation and of humanity in particular, on how to live and be successful on Ayé (Earth). Most Òrìṣà are said to have previously existed in the spirit world as Irumole, and then become incarnated as human beings here on Earth. Others are said to be humans who are recognised as deities upon their death due to extraordinary facts accomplished in life.

Many Orisha have found their way to most of the New World as a result of the Atlantic slave trade and are now expressed in practices as varied as Santería, Candomblé, Trinidad Orisha, Umbanda, and Oyotunji, among others.

Yoruba tradition often says that there are 400 + 1 Òrìṣà, which is associated with a sacred number. Other sources suggest that the number is “as many as you can think of, plus one more – an innumerable number.”

Practitioners traditionally believe that daily life depends on proper alignment and knowledge of one’s ori. Ori literally means the head, but in spiritual matters, it is taken to mean a portion of the soul that determines personal destiny.

The Orisha are grouped as those represented by the color white, who are characterized as tutu “cool, calm, gentle, and temperate”; and those represented by the colors red or black, who are characterized as gbigbona “harsh, aggressive, demanding, and quick tempered”. As humans do, orisha may have a preferred color, food, or object. The traits of the orisha are documented through oral tradition 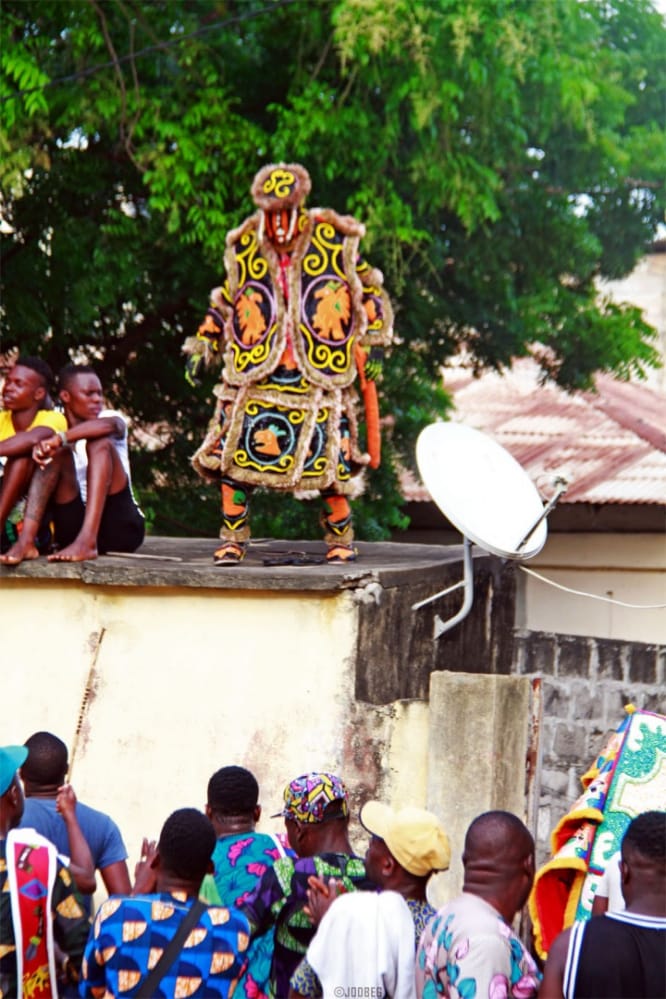 Ergun: Ritual of the Dead

Ritual of purification : At the end of each year fons, gouns, mina, and yoruba

The multiple ceremonies taking place  throughout the year – though beneficial to the recipients -, create negative social externalities in time and space , for the community as a whole. These evil spirits are a race of evil miniature fairies that are specially born from these rituals. Getting rid of them necessarily requires a great purification ceremony, lasting about a month, in the regions concerned.
This ceremony is a staging  orchestrated by all the administrators of convents. The music, the songs and the dance come from a reproductive interpretation, which makes it possible to invoke the good divinities to drive out the evil spirits which swarm at night as of day in the city, in the clearings, the undergrowth, the lakes, the backwaters and rivers

We use cookies on our site to give you the most relevant experience by remembering your preferences and repeat visits. By clicking “Accept All”, you consent to the use of ALL the cookies. However, you may visit "Cookie Settings" to provide a controlled consent.
Cookie SettingsAccept All
Manage consent

This website uses cookies to improve your experience while you navigate through the website. Out of these, the cookies that are categorized as necessary are stored on your browser as they are essential for the working of basic functionalities of the website. We also use third-party cookies that help us analyze and understand how you use this website. These cookies will be stored in your browser only with your consent. You also have the option to opt-out of these cookies. But opting out of some of these cookies may affect your browsing experience.
Necessary Always Enabled
Necessary cookies are absolutely essential for the website to function properly. These cookies ensure basic functionalities and security features of the website, anonymously.
Functional
Functional cookies help to perform certain functionalities like sharing the content of the website on social media platforms, collect feedbacks, and other third-party features.
Performance
Performance cookies are used to understand and analyze the key performance indexes of the website which helps in delivering a better user experience for the visitors.
Analytics
Analytical cookies are used to understand how visitors interact with the website. These cookies help provide information on metrics the number of visitors, bounce rate, traffic source, etc.
Advertisement
Advertisement cookies are used to provide visitors with relevant ads and marketing campaigns. These cookies track visitors across websites and collect information to provide customized ads.
Others
Other uncategorized cookies are those that are being analyzed and have not been classified into a category as yet.
SAVE & ACCEPT